In keeping with his lifelong devotion to contemporary music, Aaron Copland created the Fund and bequeathed to it a large part of his estate. The Fund was officially announced to the public in 1992. The Fund’s purpose is to encourage and improve public knowledge and appreciation of contemporary American music.

The fund operates three grant programs and also grants permission for the use of Copland’s music. To obtain such permission, please contact Boosey & Hawkes, a Concord Company, which serves as the exclusive agent for Copland’s catalog via their web site or by emailing licensing@concord.com. For permission to use Copland’s literary work or image, please email info@coplandfund.org. 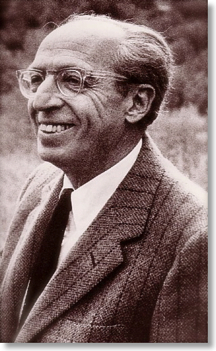 Aaron Copland's name is, for many, synonymous with American music. It was his pioneering achievement to break free from Europe and create a concert music that is recognizably, characteristically American. At the same time, he was able to stamp his music with a compositional personality so vivid as to transcend stylistic boundaries, making every work -- from the easily-grasped to the demanding -- identifiable as his alone.

From his early studies in piano he proceeded, at age 17, to study harmony, counterpoint, and sonata form with Rubin Goldmark, whose staunchly conservative outlook inspired Copland to rebellious investigation of the music of Debussy, Ravel, Mussorgsky, and Scriabin. In 1920, he set out for Paris, modernism's home in the years between the wars. Among the many vital legacies of his stay in Paris were his association with his teacher and mentor Nadia Boulanger; a growing interest in popular idioms; and the insight that there was as yet no American counterpart to the national styles being created by composers from France, Russia, and Spain. He became determined to create, in his words, "a naturally American strain of so-called serious music."

Upon his return to America in 1924, his career was launched when Serge Koussevitzky, whom he had met in Paris, agreed to conduct the Boston Symphony Orchestra in Copland's Organ Symphony, with Boulanger as soloist. When performed in New York under Walter Damrosch, the dissonant, angular work created a sensation. But Copland saw a broader role for himself than mere iconoclast. He sought to further the cause of new music as a vital cultural force. He accomplished this not only by composing, but also by lecturing and writing on new music, and by organizing the groundbreaking Copland-Sessions concerts in New York, which brought many works of the European avant-garde to U.S. audiences for the first time.

As America entered first a Depression, and then a war, Copland began to share many of his fellow artists' commitment to capturing a wider audience and speaking to the concerns of the average citizen in those times of trouble. His intentions were fulfilled as works from Billy the Kid to Lincoln Portrait to the Pulitzer Prize-winning Appalachian Spring found both popular success and critical acclaim. His decision to "say it in the simplest possible terms" alienated some of his peers, who saw in it a repudiation of musical progress -- theirs and his own. But many who had been drawn to Copland's music through his use of familiar melodies were in turn perplexed by his use, beginning in the mid-1950's, of an individualized 12-tone compositional technique. His orchestral works Connotations (1962) and Inscape (1967) stand as perhaps the definitive statements of his mature, "difficult" style.

Copland never ceased to be an emissary and advocate of new music. In 1951, he became the first American composer to hold the position of Norton Professor of Poetics at Harvard University; his lectures there were published as Music and Imagination. For 25 years he was a leading member of the faculty at the Berkshire Music Center (Tanglewood). Throughout his career, he nurtured the careers of others, including Leonard Bernstein, Carlos Chavez, Toru Takemitsu, and David Del Tredici. He took up conducting while in his fifties, becoming a persuasive interpreter of his own music; he continued to conduct in concerts, on the radio, and on television until he was 83.

Aaron Copland was one of the most honored cultural figures in the history of the United States. The Presidential Medal of Freedom, the Kennedy Center Award, the National Academy of Motion Picture Arts and Sciences "Oscar", and the Commander's Cross of the Order of Merit of the Federal Republic of Germany were only a few of the honors and awards he received. In addition, he was president of the American Academy of Arts and Letters; a fellow of the Royal Academy of Music and the Royal Society of Arts in England; helped found the American Composers Alliance; was an early and prominent member of the American Society of Composers, Authors, and Publishers; served as director or board member of the American Music Center, the Koussevitzky Foundation, the League of Composers, and other organizations; received honorary doctorates from over 40 colleges and universities. In 1982, The Aaron Copland School of Music was established in his honor at Queens College of the City University of New York.

Crediting and using the Fund’s logo

Please visit this page for information about how to acknowledge the Fund's support and download logos for use.

For the official composer web site of Aaron Copland, including a comprehensive works database of Copland’s entire catalogue, up to date news, events, and more, please visit aaroncopland.com.